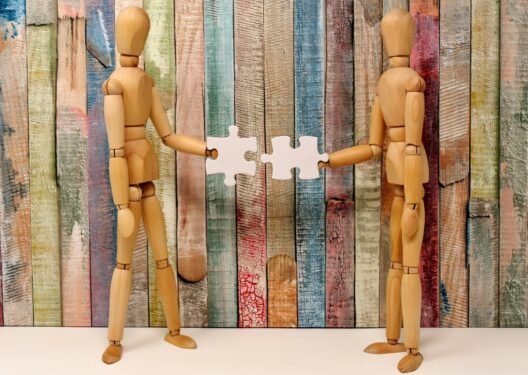 Many organisations are currently looking at their post-pandemic ways of working. One element of success will undoubtedly be how well teams and individuals can collaborate.

In this blog I write about the time when I helped my daughter to refresh the posters on her bedroom wall and what that taught me about working together.

For several years, she had completely covered her bedroom walls with pictures of football players, many of whom had now moved on to new clubs. It was time for an update, she decided.

So we spent an afternoon taking down all the old posters, removing the blu-tac from the back, identifying new pictures, cutting them out and sticking them up. With football anthems playing on her CD player, we spent a pleasant few hours refreshing the look of the wall.

She was delighted with the end result.

Why am I sharing this with you?

Not only were those hours pleasant, they were also surprisingly harmonious. It struck me during the afternoon that this was a good example of collaboration in action.

With the ongoing tough times faced by many organisations, working together is increasingly important as an option to help us find our way forward. But it’s not always easy to bring people together, either on a temporary or more permanent basis. You need to be prepared for potential challenges and think through actions to navigate trickier times.

So what did collaborating with Miss B teach me?

If I had been displaying posters on my bedroom wall, I would have laid them out on the floor first to decide on their composition. Miss B created as she went, going straight to putting them up without a floor-based trial run. Tempting as it was for me to say ‘why don’t you…’ I resisted that urge.

Your way is not always the right way. And it’s certainly not the only way.

You have to be prepared to see things from different perspectives and consider other paths to an end goal. This can be especially tricky when leaders are not willing to let go of their own sense of importance in solving a problem.

To mitigate this you will need to allow enough time for conversations where stakeholders have had their say and seen other viewpoints.

Everyone needs a clear role where they can use their skills

I was given the task of taking down the old posters and carefully removing the blu-tac. I have the patience to peel (rather than rip) and the longer nails to remove stubborn adhesive blobs. She, meanwhile, was in charge of the scissors, looking through magazines to find new players to cut out and put up. She had the vision of the end result.

Bringing people to work together, you will each have areas of strength. There will be some things everyone can do and some that only a few have the skills for.

Ensure there is no duplication or missed tasks by discussing who is most appropriate to take on different aspects of a project and allocate accordingly.

Part of being a teen is an increasing desire for independence and control. Last time her bedroom was decorated, we exerted more parental influence over what it looked like. That was OK then, not so much now.

When the original posters went up, there were fewer female players in the magazines. Miss B’s interest in both football and feminism were just beginning. Since then the focus on the women’s game has increased and she has a more targeted view of what she wants to display. So this time she updated the teams and there are more women featured.

Most organisations I know are currently rethinking their strategy, objectives and/or ways of working. They are looking for medium- and long-term plans for a world that is very different to what we have known.

When you come together to explore options, there will likely be innovative approaches and new pieces of work. This does not mean there was something wrong previously, just that times are different now and so something else is required. If you trust in your people and have a shared vision, you don’t need to know all the thinking behind the choices that they make.

Empower your people to make the decisions they need to make, underpinned by a clear and shared understanding of where you are all heading.

Have a plan, but be prepared to be flexible

The whole wall re-design began with a desire to display more of her own drawings and to update some of the players featured. But during the afternoon she came up with the idea of printing out some photos of friends and fun times, in order to include a photo montage. She was particularly delighted to see this feature at the end.

In conversations from the start, it should always be clear that you may need to add to or change your plans as you go along. Accepting this from the outset will help to avoid misunderstandings later.

It is one of the joys of collaboration that working together with different people and in different ways will often spark new creative ideas.

Be open to following those innovations and seeing how they work out for successful collaboration.

What lessons have you learned about how to collaborate well? I’d love to hear your stories.

If you would like help to communicate well about your future ways of working, check out my services page to see how I could support you.

The post How to collaborate appeared first on Time for Kindness.