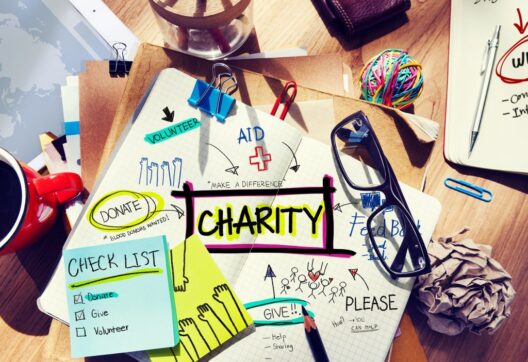 As a comms and strategy specialist for not-for-profit organisations, charities are a big part of my life. I want to make a positive difference in the world and helping organisations with a vision of a kinder world to communicate well is my way of doing that.

This blog celebrates the difference that charities have made to my life.

When I left the finance company, Prudential, I was looking for a role that would help me to develop my internal communications skills. I was relatively new in my career, but had already fallen in love with the profession and the difference it can make to an organisation.

When I saw an internal comms role advertised at Cancer Research UK, I couldn’t believe my luck. I was delighted at the idea of using my skills to make a difference at such an organisation.

I stayed at CR-UK for 7 years, joining 1 year after merger (when people were dusting themselves off and wondering what an earth had just happened!) and helping to establish the internal comms function and culture. Being involved during the period when the charity itself was finding its way was a fabulous time to develop my own skills and be part of a story that was changing the world.

Publishing the communication that told our staff that the UK smoking ban had been passed in the Commons remains one of the proudest moments of my career.

By the time I left CR-UK, I had a young daughter and wanted to combine my belief in internal comms with family life. So I decided to work as a freelance communications specialist in the not-for-profit sector.

This has enabled me over the last 12 years to work with some truly amazing charities, NGOs, public sector organisations and universities, helping them to solve problems by improving communication.

For me personally, it also allowed me to get a better understanding of end of life care, visiting hospices for the first time. The care, compassion and drive that these people had, whether working with patients directly or in other areas of the charity, was truly humbling.

I’ve come into contact with Girlguiding at different times in my life and it’s impacted me in different ways.

Firstly, I was a Brownie in the early 80s. And I loved it! The house where I grew up overlooked a suburban green; on summer evenings, I would watch the local Brownie pack playing rounders, desperate to join them. When I did, I discovered all the other activities, from games to songs to crafts. I became a sixer and loved the fact that I was responsible for my little group, the Imps! I have many happy memories from my time in the brown dress, purse belt and brown bobble hat.

Fast forward about 30 years and my daughter became a Brownie. She was also a Rainbow and a Guide. She took part in many different activities too, from crafts to camp fires to a trip to the Apple store (for an engaging way to cover internet safety). She made new friends. Like me, she made happy memories that I hope she will look back on with fondness throughout her life.

When I was expecting my daughter, other friends with children recommended we attended NCT antenatal classes. I’ll be honest, I was initially unsure if I wanted to pay for classes when I could go to NHS classes for free (and I recognise how privileged we were to have the choice). But my husband and I decided to give it a go.

It is impossible to overstate how much of an impact that decision had on our lives.

The group of people we met quickly became – and have remained – some of our closest friends. Being able to phone someone at midnight and say ‘my baby is doing this, is yours, do you think it’s normal?’ is invaluable. As is the company of like-minded adults at soft play centres, country parks and birthday parties.

Our children are now teenagers and we still see each other regularly, sharing advice, wine and good food. We’ve been through a lot together, from house moves to serious illness to looking after (and losing) aging parents.

I am 100% sure that this support network and friendship will remain central to my life during the looming exam years and far beyond.

When I decided to become involved in a charity at trustee level, I knew that I wanted to do something local for an organisation that I believed in. So I was delighted to discover that this Berkshire-based children’s literacy charity was looking for a trustee with communication skills and experience of how charities are run.

I love books and I believe that the ability to read is key for children’s happiness and self-esteem, both now and in the future. As a member of the Board, I worked with my fellow trustees to review how we told our story and engaged volunteers, schools and funders with the impact we had on children’s lives. We clarified out messages and improved our channels.

Since this was my first Board-level role, it was a fantastic opportunity to develop my governance skills. I also took part in activities such as strategic direction setting and fundraising presentations. After my 5-year term ended I took up a trustee role at another charity and plan to do so again at some point in the future.

So that’s the top 5 charities that have made an impact on me. It was tricky to pick just 5, there are so many more that I could have included. Clients such as Dementia UK, Speakers for Schools and Guide Dogs have all impacted my life in some way.

Get in touch and let me know: How have charities made a difference in your life?

The post 5 charities that changed my life appeared first on Time for Kindness.