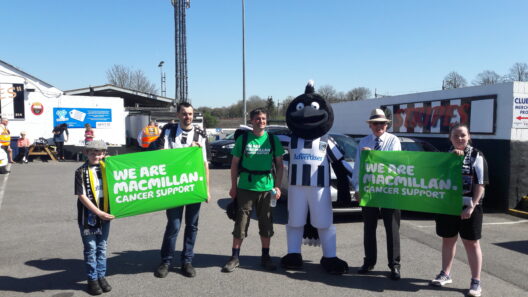 For the last 2 years, my family and I have taken part in the Alzheimer’s Society Memory Walk fundraising challenge. The amount we raised in 2020 was greater than our total this year. There are a number of reasons for this, but one of them is that we didn’t communicate well enough about what we were doing and why.

This was in contrast to the week-long, 109-mile walk my husband undertook a few years ago to raise money for Macmillan Cancer Support. His preparations went on for months, covering everything from choosing the route to booking accommodation, setting a fundraising target and packing his rucksack. He has also had to tell people about what he was doing.

With a number of charity challenges coming up, including Movember and Dementia UK’s Jog 50 miles in November, I wanted to share what he learned from his experience. His top tips might help those of you who are undertaking a challenge to raise even more for the causes that mean so much to you.

Being a football fan, he decided to build the walk around a local club, Maidenhead United, starting from one of their away games and ending up the following weekend at a home fixture. The club were a fantastic support. They helped him to promote the walk and spread the word.

He also, of course, regularly updated his friends and family about the trip. Telling people what’s going on was so successful that he had already secured nearly 150% of his initial fundraising target before he had even put on his walking boots.

He had never undertaken anything like this before, so I asked him what this experience had taught him about communication. His top 3 lessons were:

Word of mouth is a powerful communication tool.

Initially he told a few people about his plans, including close friends and family and a contact at Maidenhead United. People were interested in what he was going to do and were able to introduce him to others who were also keen to know more. This network of connections grew and spread the details more quickly than he would have been able to do on his own.

Although he had never used Twitter before taking on this challenge, he was already an active member of online football discussion boards. He was surprised by how many people he had never met, but who had a connection to him and his story through Maidenhead United or football more generally, took the time to respond, retweet and even sponsor him.

The consistent thread throughout all the communication that he and others did was that he was walking a long way to raise money for a great cause. The football connection and the fact that he had a personal reason to support Macmillan were details that added extra layers of human interest. Being interviewed by a journalist from the local newspaper, the Maidenhead Advertiser, was another new – and somewhat disconcerting – experience. But it led to a pitch-perfect telling of the story that reached an even wider audience.

For the final mile into the stadium, he was accompanied by a 7-foot magpie, Maidenhead United’s mascot Yorkie – something else to chalk up to experience!

If you would like help planning the communication for your fundraising charity challenge, drop me a line for some tips.